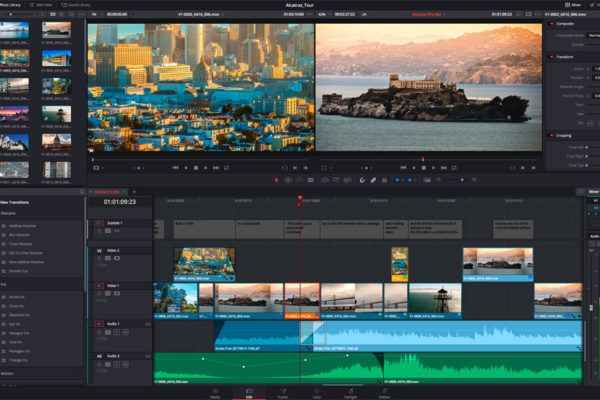 Although open source video editing applications such as Kdenlinve, Openshot and Shotcut are fantastic non-linear editing solutions for Linux users, these are not applications that are used at Hollywood production level. But not so long ago, Blackmagic Design has decided to release a Linux version of its highly professional non linear video editing suite DaVinci Resolve to the Linux community for free. And this is not a completely stripped-down version of the commercial product, but offers almost all the functionalities that the paid version contains. And now Blackmagic Design has released version 15.1 with over 80 new improvements. Are you looking for a powerful video editing application under Linux that offers professional functionality, efficient workflow support as a focal point and is very robust and stable? DaVinci Resolve 15.1 is released for Linux. Let’s take a look at what it has to offer.

If you are a fan of video editing, creating vlogs or editing semi-professional video, there are plenty of alternatives for the Linux operating system. There is a wide variety of applications available, from simple to very extensive, such as Shotcut, Openshot, Pitivi, Avidemux, Cinelerra and Flowblade. Video editing under Linux unfortunately has the name that it works well, but can be accompanied by frequent crashing. The Non Linear Editing solution Kdenlive proves itself to be a more stable application compared to the other Linux based editing applications, but has a steep learning curve. Kdenlive is one of the most powerful and feature rich open source non linear video editors (NLE) under Linux.

However, not long ago a very nice editing application for Linux has been added to this list: DaVinci Resolve. DaVinci Resolve from Blackmagic is a very professional application with its roots in color correction. When it was originally only a color correction tool, it was the go-to tool for many Hollywood films and major TV productions. In the following years, however, it has evolved into a complete editing suite with next to color correction, also non-linear editing and professional audio post production and is a serious alternative to Adobe Premiere and Final Cut X. And recently DaVinci Resolve is also available for the Linux platform. And perhaps the best thing is that there is a free version that is almost equivalent to the paid full version. For the open source purist, keep in mind that this is a free version of a commercial closed source offering.

What has DaVinci Resolve to offer

DaVinci Resolve offers a set of powerful tools for video editing, color correction, audio post production and with the previous release 15 visual effects as well. These functionalities are offered in a streamlined workflow. With a single click, you can instantly move between editing, color, effects, and audio. Plus, you never have to export or translate files between separate software tools because, with DaVinci Resolve 15, everything is in the same software application.

Start below video for a nice overview of all new stuff in the previous release.

Later in this article I will show what is new in release 15.1.

DaVinci Resolve has a number of working areas within the same application which work together seamlessly.

The color correction module once was the sole purpose of DaVinci Resolve and is still one of the best in the industry. It offers traditional temperature control, tint, mid-tone detail, and more. There are curve editors to quickly sculpt contrast and highlight different shadow areas of an image with separate curves and soft clipping for each channel. You can work in high dynamic range and wide color space formats including Dolby Vision, HDR10 +, Hybrid Log Gamma, and more.

With Fairlight audio built in, you get a complete digital audio workstation with professional mixer, automation, metering, monitoring and sample level editing. It offers a full professional mixer with input selection, effects, inserts, EQ and dynamic graphs, output selection and more. You can add plugins like VST. There is advanced equalization. It lets you produce multi-layered recordings quickly and easily. Real time punch in your record at any time during live playback and you get a complete set of sophisticated ADR tools for replacing dialog.

DaVinci Resolve offers advanced media management. You use the media page to import footage, sync audio and prepare it for editing. Simply drag and drop files from your storage into bins or even your timeline. Create free form or metadata based smart bins to organize clips. Use embedded metadata or add your own sync clips, change display names, manage starts and stops in Multicam angles. Quickly add multiple jobs to the render queue for batch processing. You can even offload output to another workstation.

DaVinci Resolve available for Linux but …

What is in my opinion a bit strange is that Blackmagic Design offers DaVinci Resolve in the base only for Linux Red Hat and CentOS Linux. That while the most popular Linux distributions are among others Ubuntu and Linux Mint. From design DaVinci Resolve does not run out of the box on distributions other than these preferred distributions, but that does not mean that it is not possible. In a later separate blog post I will explain how you can install DaVinci Resolve on Ubuntu-based distributions. That is not easy to do, but it is doable. Further in another later blog I will describe my own experiences with the use of DaVinci Resolve from a beginners perspective, as most of the readers of this website are probably in that section.

DaVinci Resolve 15.1 is released for Linux, so what is new

So DaVinci Resolve 15.1 is released for Linux. Like already said before the latest release of DaVinci Resolve contains more than 80 new and improved functionalities. So let’s highlight some of them. But have a look at the following visual summary by Blackmagic Design first.

RAW support
One of the important updates is the full support for the Blackmagic raw format. Like the unedited and uncompressed raw format in the photography world, raw in the video world gives you the same enormous flexibility to get the images to your hand without losing on other image quality aspects. Raw files contain all image information for the editing process, enabling you, among other things, to perform important high and low light recoveries.

Below overview of new and improved features comes from the release announcement on the Blackmagic forum.