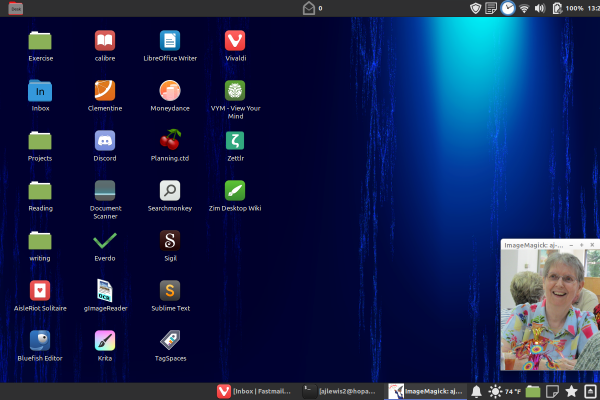 I am very pleased that another reader of this website is willing to share a personal Linux related story. This time Anita Lewis shares her Linux adventures with us. She describes her journey that started in 1983, during which she initially came into contact with various non-Linux computer platforms, such as a Data General computer with reel to reel tapes, Apple, Commodore 64, and Windows 3.1. But it was the purchase of a Compaq Presario 2100 with initially Windows 95 that marked the beginning of a long-running Linux exploration for Anita when she tried to install RedHat 5.2 on this computer. I am sure you will enjoy Anita Lewis’ personal Linux story as much as I did.

I was 37 in 1983 when I first touched the keyboard on one of several terminals attached to a Data General computer with reel to reel tapes, a large hard drive (as in physical size) and a loud printer. I was in West Berlin, hadn’t found a job yet, and decided to take an introductory computer course at an American college before calling it quits and going back to the U.S. I fell in love with coding beginning with FORTRAN which was part of the course. I was offered and gladly took a part-time job watching over the computer lab (starting the machine, closing down, and assisting students who were not yet ahead of me in course work). I also got a full-time job as an office assistant on the same day! This job introduced me to the Wang word processor and soon after, my boss got an Apple computer which made my job a lot easier. No mice in my life yet.

“Meanwhile in Finland, Linus Torvalds was in his early teens and was much better in BASIC than I was”

It wasn’t long before I invested in a Commodore 64 which used a cassette tape for storage and was hooked up to a TV as I recall. I learned BASIC and remember taking Calculus and checking some long calculations by writing a little script to run through the calculation by machine. Double fun for me! Meanwhile in Finland, Linus Torvalds was in his early teens and was much better in BASIC than I was. He worked in machine code and came up with the prototype of Linux in 1991.

After the install I rebooted and got a black screen and a blinking cursor. Not what I expected and I had no idea what was going on. I found out that I must login and as a newbie, of course went crazy when the keyboard seemed to not be working when I typed my password. Okay, discovery number one: this is a feature to keep the evil one standing behind me from seeing this secret thing. Then I found out that I must type ‘startx’ and ENTER in this situation of the black screen. I did this and “got no joy” (a phrase I learned around this time.) I’ll keep this story short although it took weeks to work through.

My Presario had MediaGX graphics and the module (driver for Linux) was pretty new. Booting back and forth into Windows I connected to the Linux community and learned how to use email, usenet, and a text browser without any graphics. I found the newsgroup for X (which was graphics for Linux) and posted about my problem. The author of the module answered and told me where the doc (not the doctor) was for this module and that I could change some numbers in a file to fix the problem. The doc would tell me how to figure out the correct numbers. Talk about being dumped into the deep end of the pool as a newbie. It was stressful and it was invigorating! I booted into a graphical desktop after reading that doc 3 times and calculating the numbers for the config file. I continued to monitor the newsgroup and chime in when someone ran into a problem with MediaGX. I had graphics, but also had pretty good skills with the command line. All the time I’d spent coding on a terminal in class and using computers without graphics before seeing Windows did help.

“Linux was not nearly as user-friendly as it is today”

To get more knowledge about Linux I took an 8-week Basic Linux course by Henry White which he ran on an email list. Eventually I was helping Henry with answering questions on the list. Some of us met on IRC (Internet Relay Chat) once a week. This is text-based where we got to know each other as well as take up computer problems or course questions. Later I got involved in another Basic Linux course for a few years. Like Henry, our main goal was to help new Linux users. Back then, Linux was not nearly as user-friendly as it is today. I saw the turn take place with Ubuntu. That was a huge breakthrough for non-geeks to jump in. I was using Debian, but switched to Ubuntu to become familiar with what my mom was now using instead of Windows.

I dropped Ubuntu after Unity came out, and switched to Linux Mint with Cinnamon desktop. This has the look and feel that I like. I’ve spent years with RedHat, SuSe, Slackware, Debian, Ubuntu, and now Linux Mint and a few others just to try out. They were all good systems for me and the communities have been great. I have always had Windows on my computers as well. Even now there are some things I need to do in Windows. Currently I boot into Windows to download Audiobooks from the library and put them on an mp3 player. When I do that chore it often takes some time while I wait for the updates to take place and release me into the reboot. That is one of the many things I love about Linux—updates do not grab you like that.

“There is always something new to learn and do in Linux”

The latest thing I’ve learned to do is edit epubs using a variety of tools. Open Library will often have a scanned copy of a book I can’t find in ebook version. I can download the pdf of the scan and sometimes an epub. I can OCR the scan and get the text to edit if there is no epub. Most of the time I’ll read the book using the pdf on a tablet, but if I want to keep a copy for reference, I’ll edit the epub. I break it into chapters and then edit each chapter using Zettlr in markdown. I like to use Zettlr, because I can have it open side by side with the original scan for reference and it has a nice dark screen with very good keyboard shortcuts. Using markdown is simple and Zettlr is a great tool for that. I use pandoc to pull it all back together into an epub. If the editing is lighter, I use Sigil to fix it. I enjoyed learning to use these tools and I like doing the editing and having the final product when I can’t find it available for purchase. It seems that there is always something new to learn and do in Linux. So it’s been 38 years playing and working with computers and I still enjoy the little learning curves I run into.

Anita first touched a computer keyboard in 1983 and fell in love soon with coding. Anita’s hardware and software journey started with a part-time job watching over a computer lab. In 1998 Anita discovered Linux and that was the beginning of her passion for the Linux operating system and related software. And she still enjoys the little learning curves she runs into.