Although I really like the simple Open Source email application Geary, after giving it a chance more than once, I always returned to Mozilla’s Thunderbird mail application. One of the biggest barriers for me to use Geary permanently is the fact that it is not possible to create new folders, or in geary terminology Labels, within the application. You have to do that first in your webmail before they will show up in the label list in Geary. But this most recent release contains a lot of improvements so let’s see what geary 0.13 has to offer and if the improvements make me want to switch.

If you do not want to be overwhelmed by the bells and whistles of the more old school organized applications like Thunderbird and prefer a deliciously well-organized and simple mail application that is easy to use and has a modern conversational workflow, then you probably find a nice alternative in Geary.

The Geary email app offers a nice clean and modern interface where you will not be bothered by an excess of non core functionality and therefore offers a lightweight user experience like we see more and more in apps on mobile devices. Your messages always form the center in a well presented two- or three-column layout. Messages are presented in the form of conversations as opposed to classic individual emails, which is a more modern approach but can be something of a hurdle for old skool users.

It has been a while. We had to wait a long time to go from version 0.12, which was released on the second of October 2017, to version 0.13. So I am very eager to see what has been changed and if it is worthwhile. And of course I want to know if the for me in app label creation has been added. According to the Geary 0.13 release note there are quite some nice and useful changes. 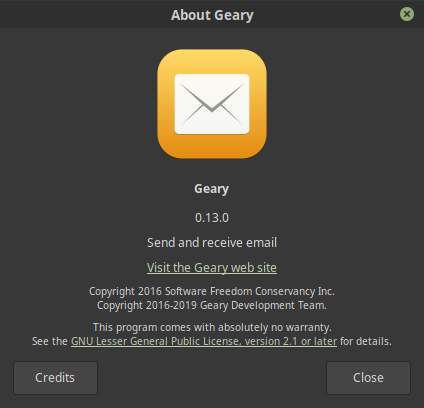 The following enhancements are included in this release (list copied from the Geary release page):

My two cents on the current release

As you could read, Geary offers a number of useful and nice improvements that will greatly improve the user experience. So what is my humble opinion on Geary 0.13.

First of all I hoped of course that we can create new labels in the application. Sadly this is still not the case. But it is for me not automatically a reason anymore to not give Geary another chance. Over time I already have created all the folders I need and these automatically pop up in Geary. So the need to create new labels is diminishing and if I need a new one, well ok, than I still have to do that outside of the app once in a while.

Conversations indeed load much faster and smoother. And not just the conversations, but the entire application seems to be snappier. It feels very responsive.

Improved account creation and management user interface. I have more than one email account, not being gmail or outlook, so I need to do some manual setup to add these additional accounts. And it is much more clear and convenient now to do this.

Supported ordered and unordered lists in the composer. Sounds simple, but for me it is a great improvement. As I do a lot of explanation on a diversity of topics in mails to friends, colleagues and other relations, I use a lot of bullet items and lists. In previous versions of Geary I had to use my own symbols, but now I can use nice bullet list and ordered lists. This is a welcome improvement.

Rich text pasting improvements in the composer. Pasting complete passages of composed internet pages or sections of documents can be added now to your mail without losing too much of the formatting. This is much better now than in previous versions. Still not perfect, but very usable.

Show an in-application notification when email has been sent. Well, not much to say about this, except that it is very nice to be notified after sending an email that takes a bit longer due to its size. Also simple improvements can help to make an application more desirable.

One strange thing. I ran into the following. In a distribution such as Linux Mint, it is normally possible to pick up an application and hold it against one of the sides of the screen for automatic half screen snapping. With Geary that does not work if you do not first minimize the width of the two left categories and mail list columns first. The three columns in geary do not automatically adapt to make half page snapping of Geary possible. I checked that with older versions of Geary and it is the same there. It was something that I had not noticed before.

Geary is available in Linux Mint in the standard repositories (via Software Manager), but it will not give you the most recent version. You need to use the PPA (Personal Package Archive) to get the most recent release and enjoy the latest improvements. To activate the PPA you can use the following commands in the order as indicated via the Terminal command line:

Geary can also be installed as Flatpak. In the latest Linux Mint distributions Flatpak is already available. If you have a Linux Mint version older than 18.3 you must enable Flatpak by typing and activating the following commands:

Now find the Flatpak version in the Software Manager or go to https://flathub.org/apps/details/org.gnome.Geary and click on Install. Choose Open and the installer will be opened in your Linux Mint Software Manager. 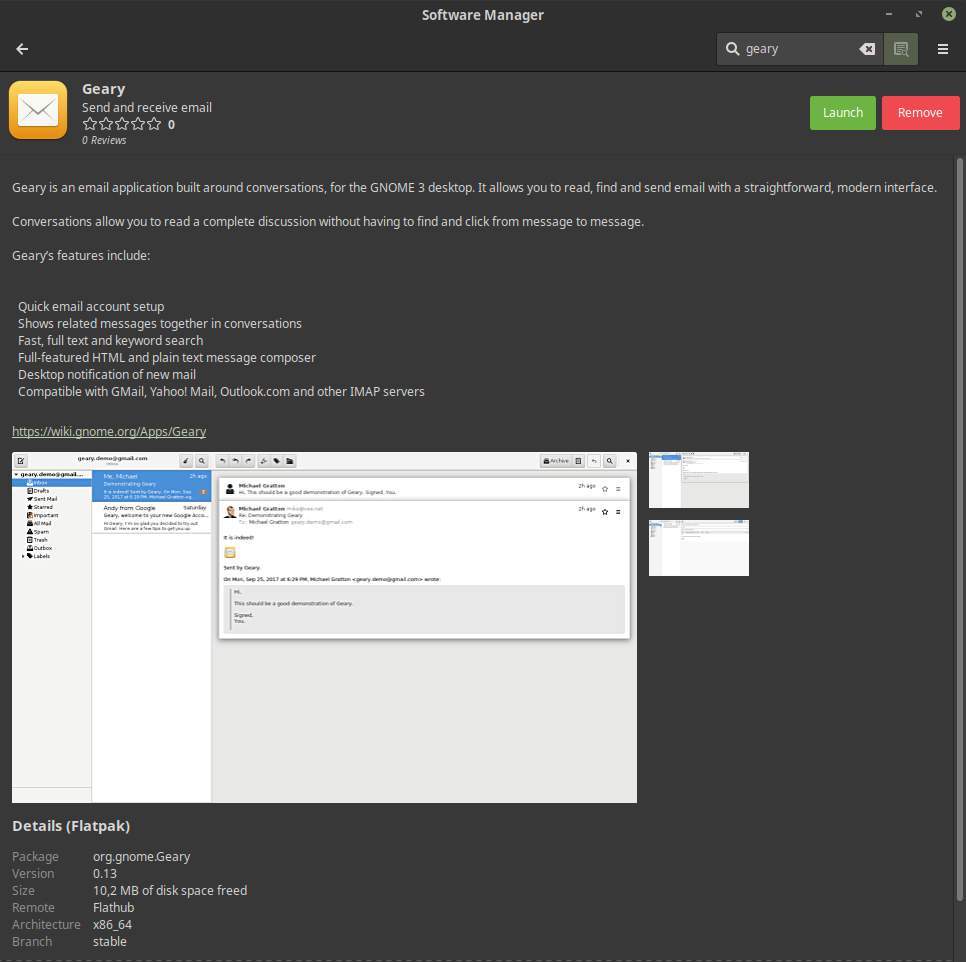 Connecting Geary to your mail

Geary works well with the best known webmail services, such as Gmail, Yahoo and Outlook, but also works with IMAP and SMTP so you can also activate mail accounts with other providers.

On the internet there are quite some people with questions about the use of Geary in combination with their Google Gmail account. Simply put, many users can not sign up for their Gmail account and receive notifications about security issues. Despite what many claim on the internet, this is not a problem of Geary, but the result of changed security rules from Google. However, this can easily be solved by taking the following steps:

1) Login via the browser in your Google account
2) Go to https://myaccount.google.com/
3) Choose Sign-in & security
4) Scroll all the way down
5) Activate “Allow less secure apps”

Now it will no longer be a problem to setup your Gmai account in Geary.

I think there are some nice improvements in this most recent release of Geary, but my own feeling tells me that geary is still not quite there for everyone. Especially not for real power users. For me, the lack to create labels in app is not a real obstacle anymore, but can be a showstopper for others. So it would still be nice if this is being implemented in the near future. I find the interface very nice and pleasant to work with and I like the minimalistic approach and setup. And furthermore with this release the application feels faster and is easier to set up. I would say, if you have a minimalistic spirit and like to simplify the things you do and use, give Geary a try.