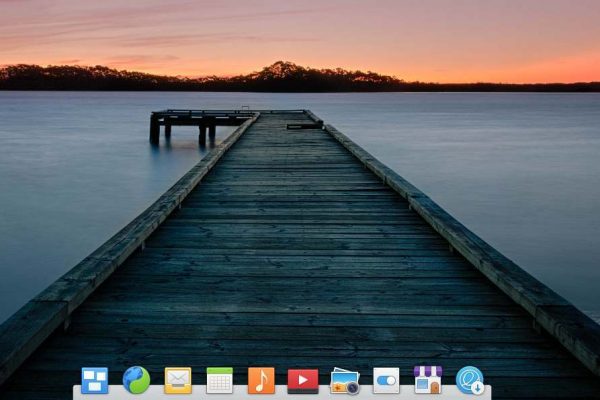 This week, on Tuesday December 3, 2019, Co-founder Cassidy James Blaede announced in an extensive blog that the 5.1 successor to the previous elementary OS Juno 5.0, which was already introduced more than a year ago, is immediately available for download. The new Linux distribution elementary OS 5.1 has been named Hera. Hera is a Greek goddess and also the wife of the God Zeus. This is nicely in line with Juno, which is the Latin name that the ancient Romans used for this same goddess Hera. Many of the improvements in Hera have, due to the somewhat rolling nature of elementary OS, been released to users in various interim updates in recent months. But this official new major update offers many more improvements in addition to these already released changes. In this blog post I will only give a global overview of what this release has to offer. When I have been able to work productively with this latest version for a while I will come back with a blog post with a more in depth and detailed description of everything that this distribution has to offer. So let’s see if the update to elementary OS 5.1 Hera is a valuable addition to the Linux landscape.

The Linux distribution elementary OS, which is based on Ubuntu, always keeps the minds busy. There are very strong opinions about this somewhat different Linux distribution. On the one hand, it is very popular among Linux beginners, switchers who come from the macOS platform, style and design enthusiasts, and minimalist-minded computer users who are more focused on productivity than on the underlying technology. On the other hand, there is a very large group of Linux enthusiasts who have a strong opinion about this distribution, often because of the consciously minimalist approach and the functional limitations that have been chosen by the team, which many Linux purists find unacceptable. Many Linux enthusiasts appreciate the completely open nature of most other Linux distributions and therefore being in control of everything they can do and choose. This openness is a bit in contrast to elementary OS, as the team behind this OS kind of positively dictates strong but strict human interaction style guides, deep integration, thoughtful uniformity, deliberate simplicity, minimalism and also strong believes in the underlying pay what you like model with a platform for curated applications. You can find myself in the group of elementary OS enthusiasts, since at the end, an operating system is just a tool for me and being able to use applications in a productive and distraction free manner is more important. I care less about total freedom to be able to control everything in an operating system and instead appreciate the effort of the elementary OS team to offer a very refined and distraction free operating system that ensures that you focus primarily on productive tasks.

The elementary OS Linux distribution is based on the Long Term Support release of Ubuntu and therefore has a strong and stable foundation on which to build. Because of the LTS basis you do not always have the latest and greatest technical improvements, but that is not automatically a disadvantage in my opinion, because as a result you always have a stable, robust and proven operating system. Pantheon is the desktop environment of elementary OS, which by many is, and in my opinion incorrectly, seen as a copy of the Apple macOS. I think elementary OS with Pantheon is so much more and has its own unique characteristics. Of course, based on the existence of the dock and a number of color and style properties, indeed, people who only have a quick glance at this distribution, will see similarities to what Apple has to offer. But this is not what the team really want and what they stand for. The team behind elementary OS has a very clear and unique vision of what they want to achieve with this operating system, both from a functional perspective, from their extensive style guide Lines, and from their idea that also in the open source world programmers may be rewarded for their efforts. Read for example their very extensive and nice read on Human Interface Guidelines. 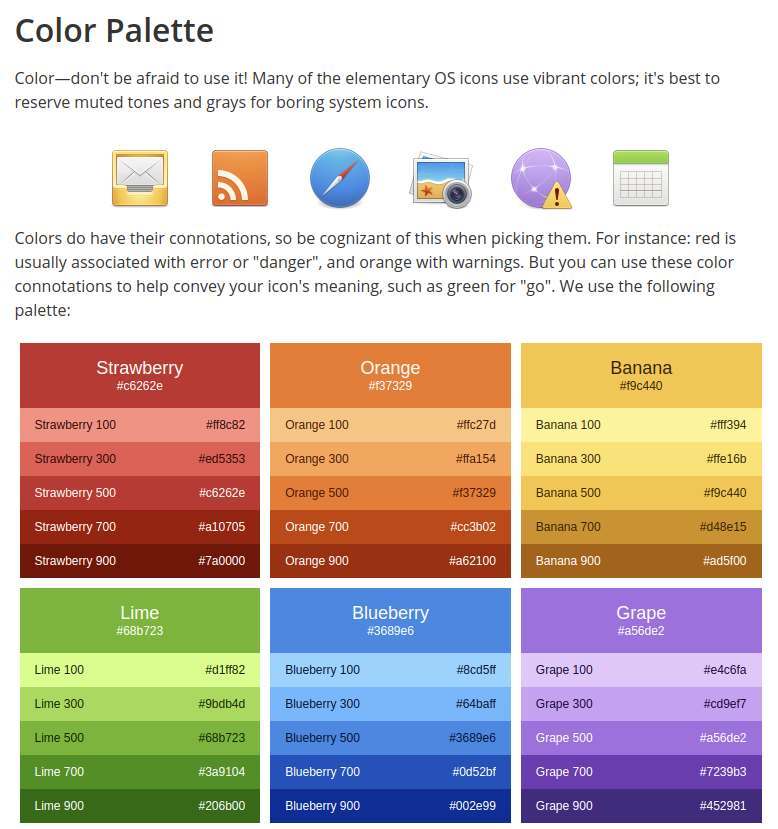 It proves the depth in which the elementary team thinks about the importance of design principles. elementary OS is a well thought out system.

What is new in elementary OS 5.1 Hera

As already indicated, a number of improvements in elementary OS 5.1 Hera have already been added to 5.0 Juno in the past months via the standard update process. But now all these individual improvements, supplemented with a number of extra changes, come together in a nice new package that can be downloaded and installed by new users and users that want to start from scratch. Existing 5.0 Juno users will automatically update to 5.1 Hera. A little more information about the download and update process follows later in this blog post.

Based on the same stable and robust foundation as the previous release, elementary OS 5.1 Hera offers lots of improvements and changes. So let’s go a bit deeper into some of these changes.

New look and feel of Greeter
The first visual change you will see each time you log into your system is the new login Greeter. In my opinion it is a visually appealing card style based presentation in which you see your avatar, your desktop background in miniature and your name. When having multiple users on your system, the personalized login cards all with their respective desktop backgrounds will be presented next to each other ready to be selected.

Friendly Onboarding
Probably experienced users are less interested in this feature, but to attract potential new users, a nice and friendly onboarding process is a welcome offering. The new Onboarding functionality guides new users in six steps through some basic information and adaptable settings, like Locations Services, Night Light, Housekeeping and Appcenter awareness, which where previously a bit harder to find for beginners. A great way to make new users feel right at home in a style neatly integrating in the overall elementary OS look and feel. 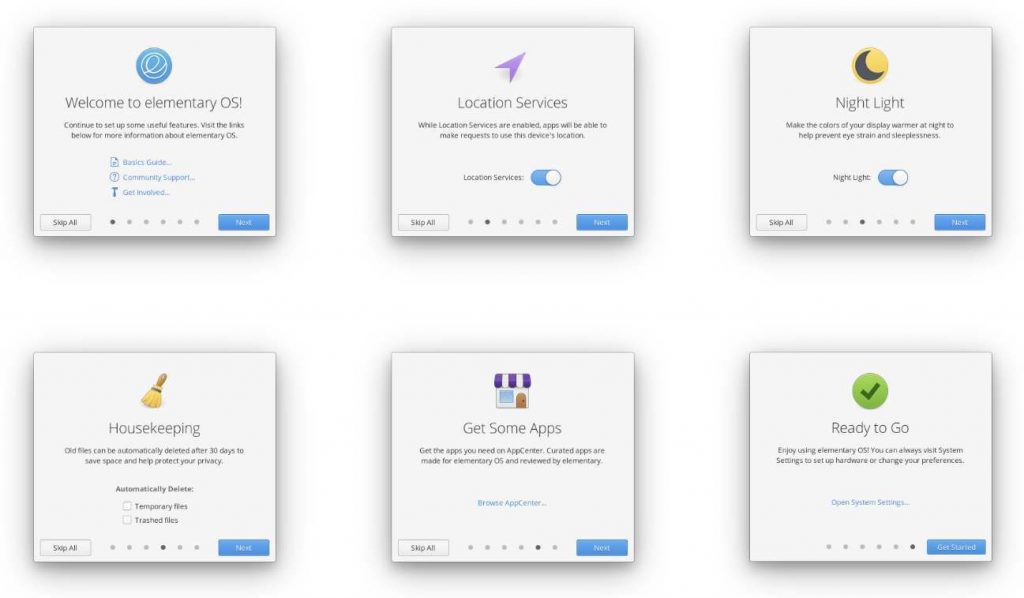 Overall visual style
The underlying overall style sheet of elementary OS has been changed. Dark style based apps now have a more neutral dark grey color where it was more blueish grey before. Lists have become nicer due to a fade effect on the end positions.

Flatpak support
elementary OS previously focused primarily on the elementary based curated apps, but the elementary team couldn’t ignore the fact that most Linux users want to try and use other applications as well. Flatpak packages are becoming increasingly popular because it is simple and secure so it is good to see that Flatpaks are now supported out of the box.

AppCenter
The AppCenter has a very important central role within the elementary OS ecosystem and has now become much faster. According to the elementary team even up to 10 times faster than in the previous Juno. And indeed this is very noticeable on my test machine. Next to that the AppCenter supports the previous mentioned Flatpaks. The AppCenter also works better now when you are offline, like uninstalling apps. And the AppCenter is a bit better organized with more main categories to start from. 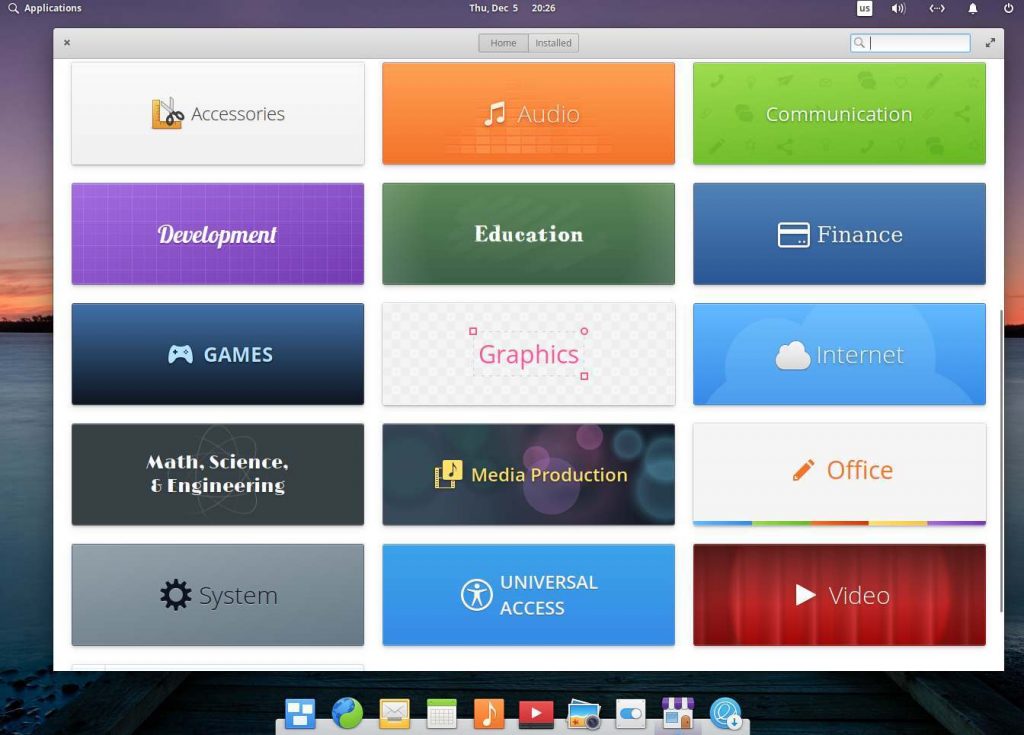 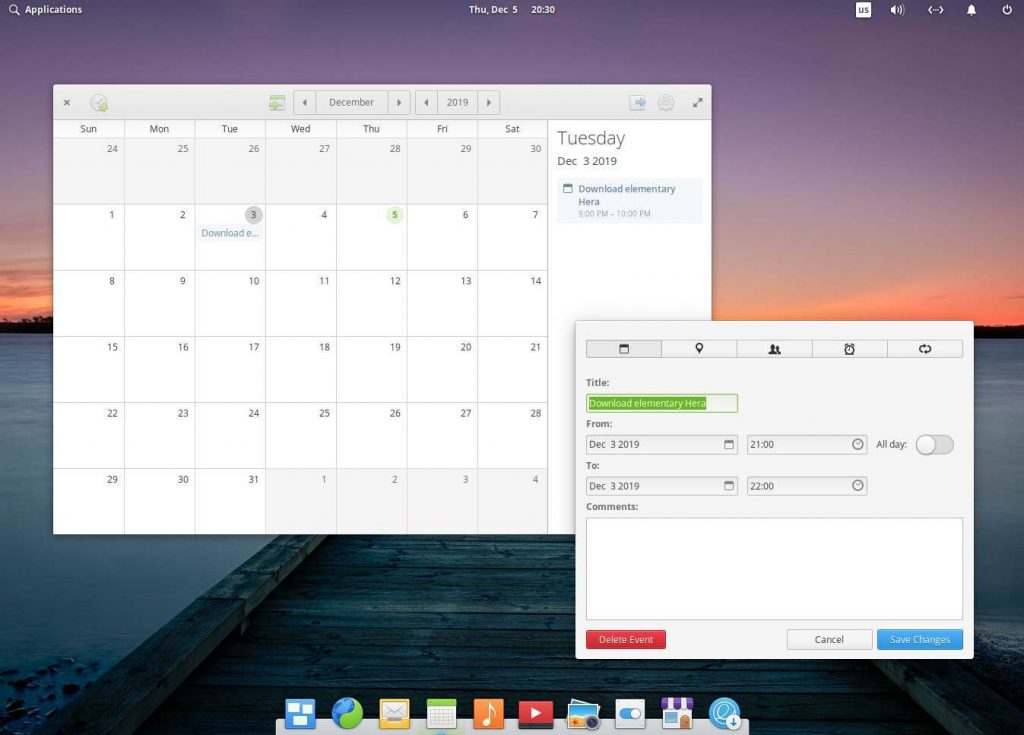 Indicators
There are multiple changes with respect to indicators. For example a wireless connection or a wired connection show their own dedicated indicators instead of a generic connection indicator. The Bluetooth indicator now nicely shows the user different icons for each type of connected Bluetooth based device. Next to that it indicates clearly which devices are connected or not.

Bluetooth
Setting up Bluetooth connections has been improved so pairing of devices with your elementary OS based computer is more reliable and more friendly due to a new pairing dialog.

Wallpapers
The standard Hera desktop wallpaper has been changed compared to Juno. Next to that Hera offers three additional wallpapers that are really nice. 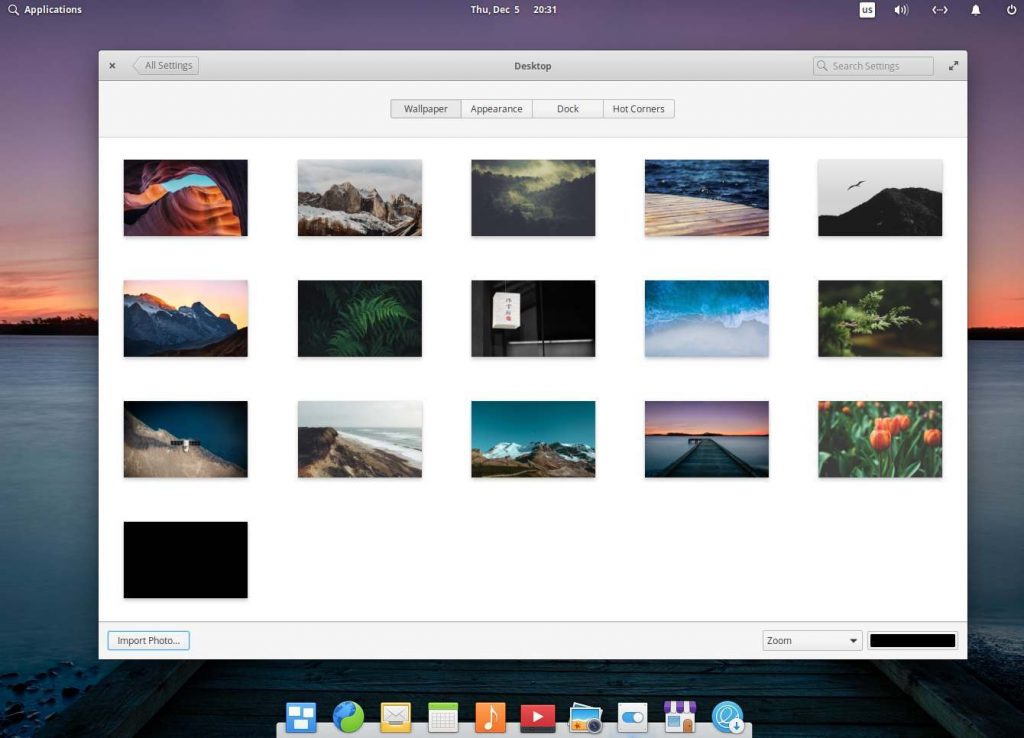 Optimized hardware support
When you install elementary OS Hera from scratch you automatically get the LTS HWE stack, which means you have improved driver support and X support for existing Ubuntu based LTS distributions via the Ubuntu Hardware Enablement stacks.Think about improved support for modern CPU’s, graphics adapters and a diversity of modern input devices.

Although not really comparable with a bleeding edge distribution such as Arch Linux, elementary OS also has a somewhat rolling character, with a monthly supply of new functionalities and improvements. Existing 5.0 Juno users have already received a large number of the above changes through automatic updates on a frequent basis and this major update will therefore also be implemented automatically for these users. But you can also go to the AppCenter yourself and install the indicated updates manually. According to the team there is one exception, namely the LTS HWE stack (The Ubuntu LTS HWE or Hardware Enablement stacks provide newer kernel with improved driver support and X support for existing Ubuntu based LTS releases). If you are currently using 5.0 Juno and updated automatically to Hera and prefer to get the improved hardware support, you can install it manually via the command line:

People who do not yet use elementary OS or for those who, despite the current installation, need a fresh installation, can download this operating system via the elementary OS webpage for free or for whatever amount you want. The aforementioned LTS HWE stack is already included in the downloadable iso file.

In many Linux related forums and blogs I often read the criticism that the elementary OS team does not come up with new developments often enough and that no fixed delivery planning is followed like other distros do. But I cannot share this opinion, especially if you look at the almost monthly released updates of recent times with small and also larger, but always valuable improvements and additions. If you compare that with some other distributions, then the mentioned limited dynamics around this distribution are actually not too bad and in my opinion there is often much clearer presence, among other things due to the always extensive and qualitative good blog posts created by the elementary team to clarify the content of the periodic deliveries. Now we have arrived at the most recent version of elementary OS 5.1 Hera and both existing and new users can enjoy what the operating system has to offer. Opinions of course always differ and apart from that elementary OS is not the best choice for every type of user, but what the team behind this operating system is good at, in addition to building a solid Linux distribution, is showing their vision, steadfastness, firm belief in what they do and a huge sense of positive simplicity, design sense and functional usability. I think elementary OS has an important place in the complete Linux landscape and I am eager to see what they are coming up with next. It is one of my favorite distros and you should try it out to really experience that less often is indeed more. 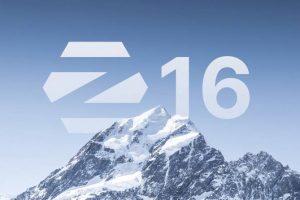 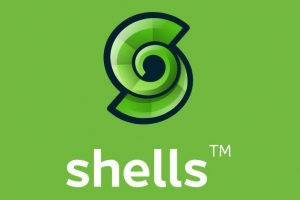