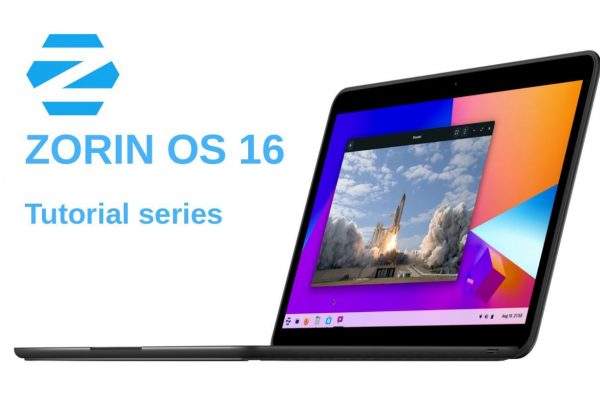 Even though there are tens of thousands of great applications available natively for Linux, and Zorin OS also provides a very friendly way for users to search and install all this beautiful software by integrating package support for both .deb, Appimage, Flatpak, and Snap, it is still possible you may not be able to find an alternative for a very specific Windows application that you used before on your Windows machine. But the great thing is that you can install a lot of Windows applications easily in Zorin OS. This article as part of the Zorin OS tutorial series explains how to install windows applications in Zorin OS.

Note: This tutorial series is still in progress, so not all chapters are finished yet.

As already mentioned in the introduction of this article, there are a lot of beautiful applications for Linux available and Zorin OS offers out-of-the-box all possibilities to find, install and maintain these applications. But despite the fact that there are so many applications available for Linux, it is of course possible that there is no Linux alternative for a specific functionality and you still need the Windows application. Or sometimes you may not know if there is a Linux native alternative available, or maybe even a Linux version of the required application. First of all, Zorin OS offers a unique functionality that when you try to install a windows application anyway, it will come up with a pop-up screen indicating that there is, if any, a Linux alternative available that offers comparable functionalities and which one that is, or even it notifies you that you don’t have to install the Windows based app because there is a Linux native version of the same app. Second, Zorin OS provides integrated solutions to enable installation of many Windows applications and games. So let’s see how all of this works in Zorin OS.

Lets first try out to install a Windows application for which you may not be aware that there is also a native Linux version. As an example we can have a look at the application Zoom, which is offered for all major platforms.

When we download the .exe file for Zoom and double click that file, we get the following pop-up screen: 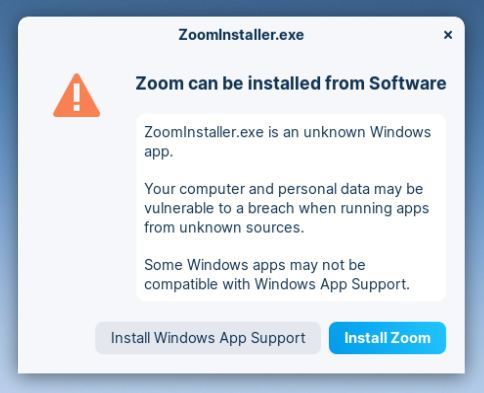 Here you see that you have the option to install Windows App Support that enables you to install and run this Windows based application. But you also see that “Zoom can be installed from Software”, which means that there is a native Linux version of Zoom available via the Zorin OS Software application.

Note: in the pop up you can read that some Windows apps may not be compatible with Windows App Support. Although a lot of Windows applications can be installed, it does not work for all Windows apps. You will find more about compatibility at the end of this article.

So you can install the native version, instead of the Windows version that you initially wanted to install, by clicking on the Install Zoom button. This gives you the following screen. 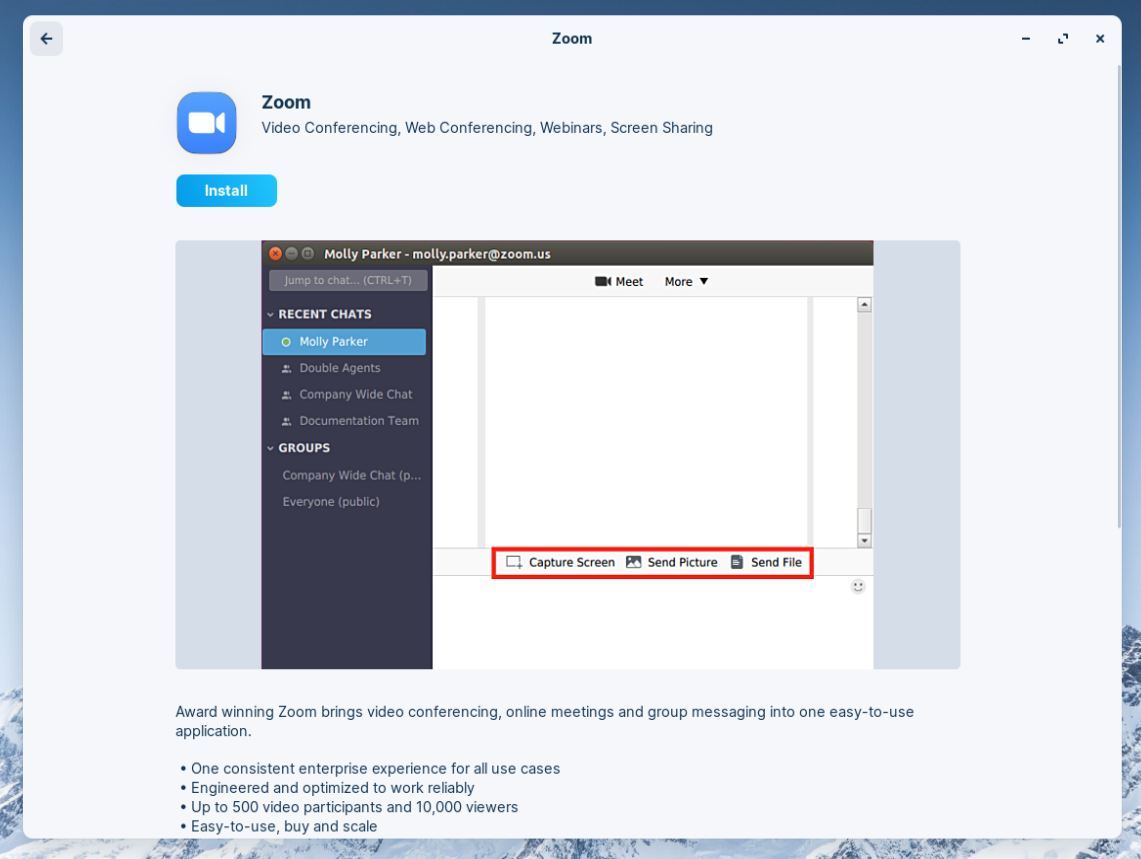 So let’s have a look again at the pop up that was shown earlier in this article.

Now let’s assume that we want to install the Windows based executable. Click on Install Windows App Support to see what happens next.

First the cache will be updated. 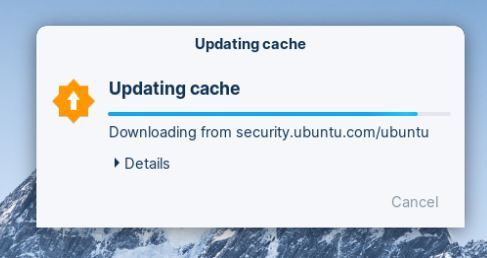 After that the required packages for Windows App Support will be installed. 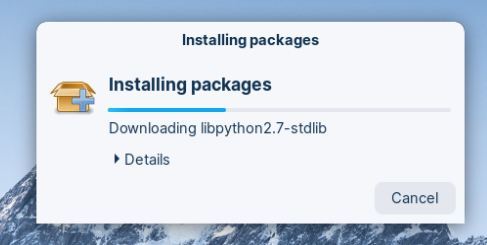 When the installation process is finished you see the following message.

Next the application Wine will be configured.

Next the Windows based Zoom application will be installed automatically.

And that is basically it.

The next time you want to install another app via a Windows based executable, you don’t have to set up Windows App Support again. This was a one time only activity.

For example, let’s try to install the application Signal via the Signal .exe file. Because Windows App Support has already been set up, now you see the following: 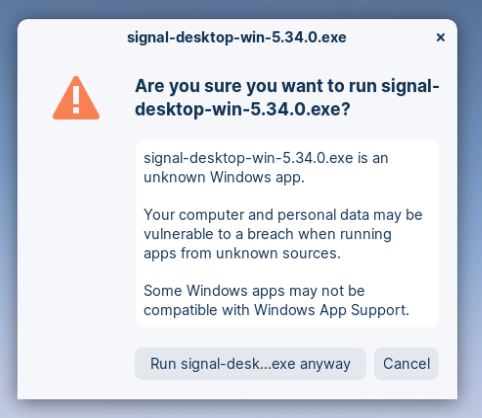 Here you see the option to directly Run the executable. So when you click the button, Signal will be installed.

Where are my Windows applications

The only extra thing we need to discuss here is where you can find the installed windows applications. They will not be assigned to one of the standard available categories in your applications menu, but you need to search for them via the Wine category. 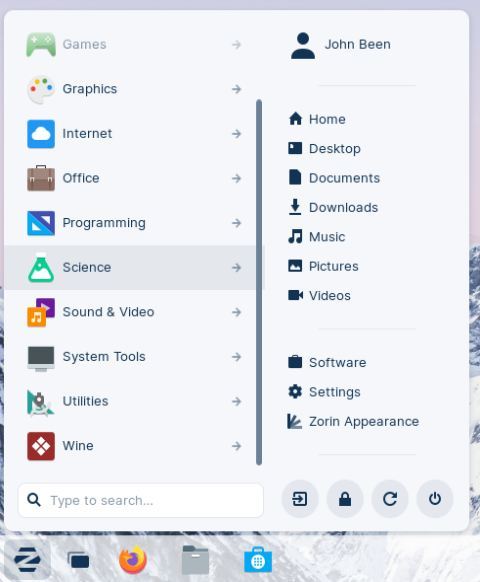 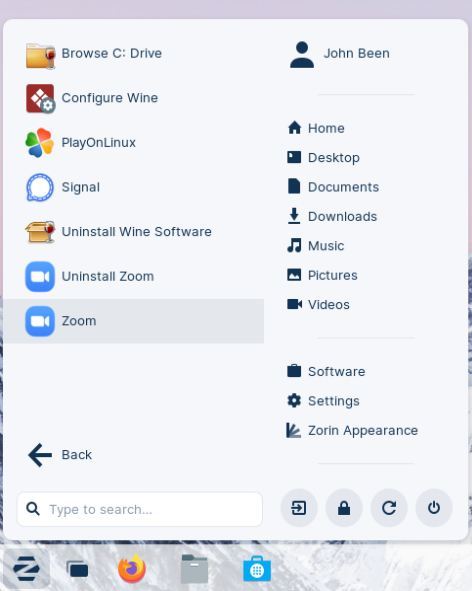 From here you can start your Windows applications.

How to uninstall applications installed via Wine 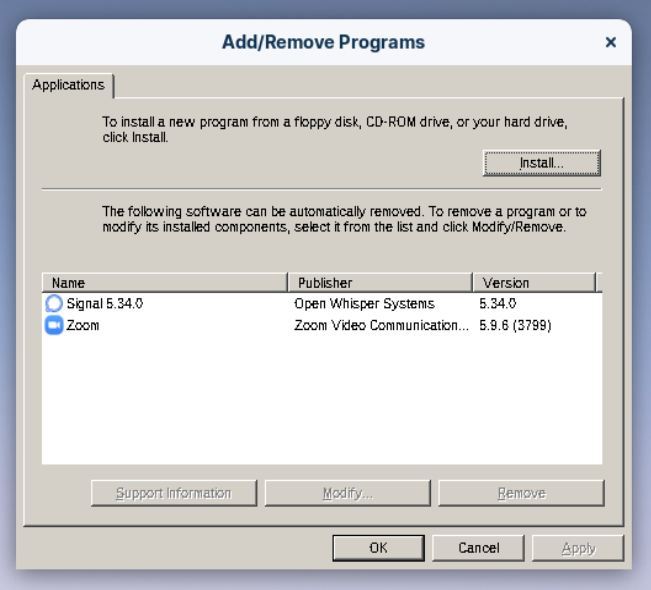 Here you see that you not only have the option to remove Windows applications, but also another way to install downloaded Windows executables via the Install… option.

Which Windows applications are supported by Wine

At the moment of writing this article there are more than 28.000 applications in this database.

In this database there are different levels of compatibility, for which you can find the links below:

Maybe you already noticed in one of the previous screenshots of the Wine category in the Zorin OS application menu that there also was an icon named PlayOnLinux. This is an application that uses Wine as a foundation, but simplifies finding and installing Windows installation files. Depending on what application you are looking for, PlayOnLinux lets you install from a specific source, like a cd or dvd, or even provide a direct download option, if available. In PlayOnLinux you find different application categories and within these categories you can browse through numerous applications to be installed or as a support mechanism to be installed.

The following screen will be opened. 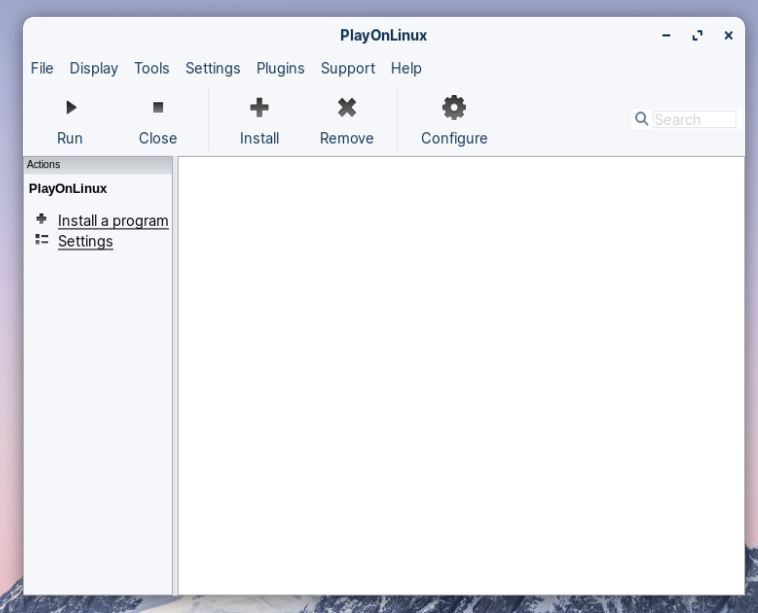 Here you will find many options, but in this article I only want to give a first impression of what PlayOnLinux has to offer. 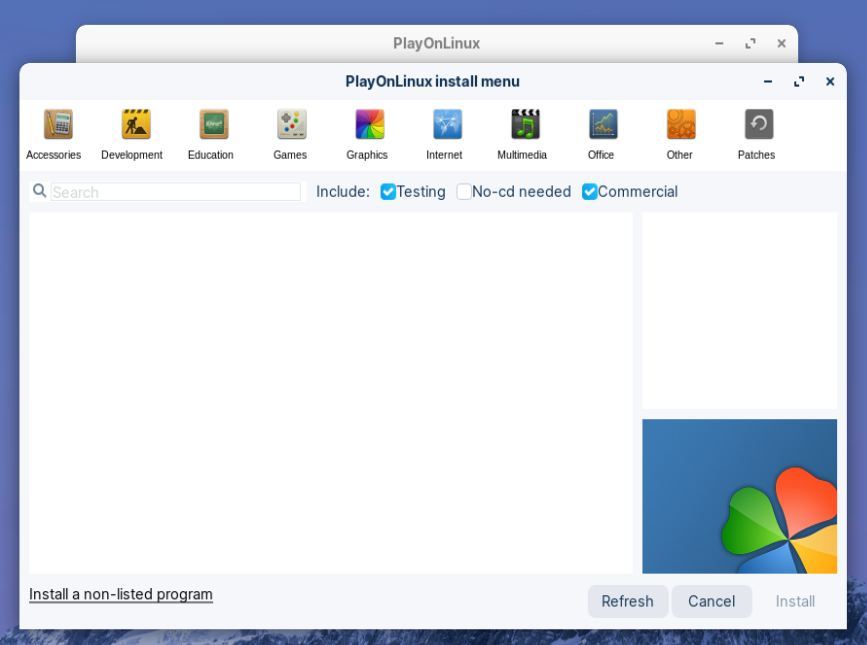 Here you see the different categories.

Select for example via the category Graphics the application LEGO Digital Designer. 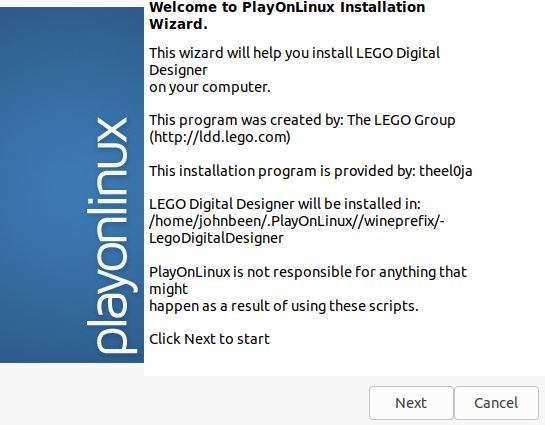 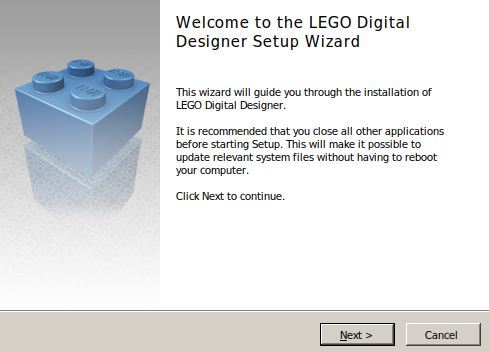 Now click on Next and go through the steps to install the application. 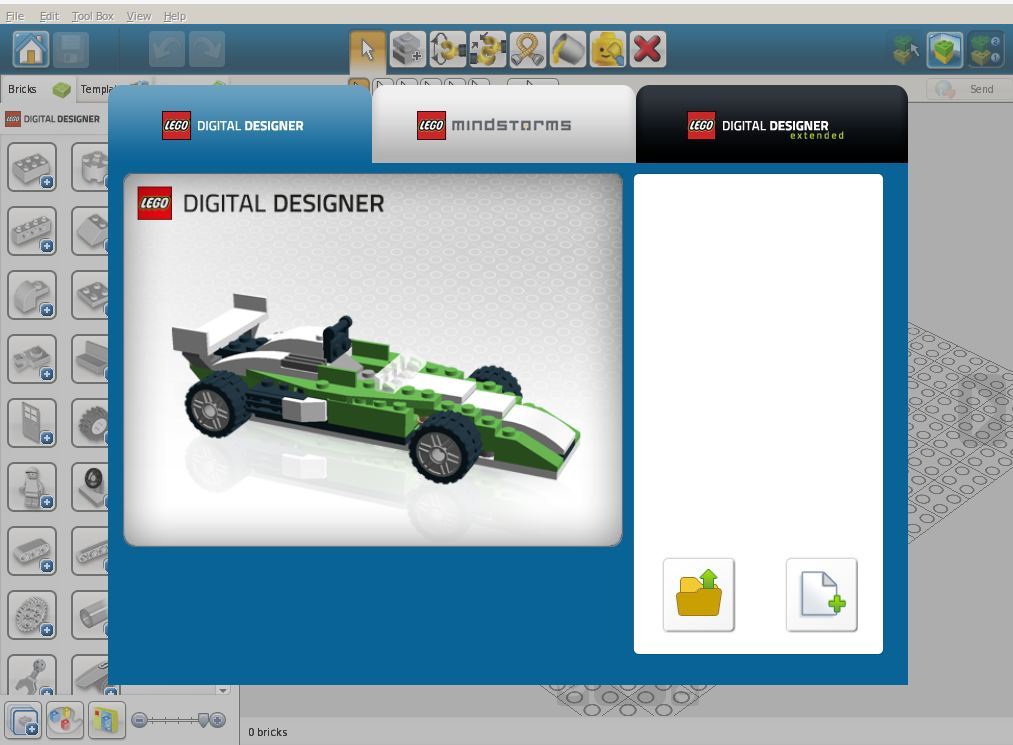 And here is your Windows application installed via PlayOnLinux.

PlayOnLinux has more to offer and there is more to explain, but that requires a separate article. In this article I just want to inform you about its existence and its relation with Wine.

Note: PlayOnLinux helps you to simplify the Windows based app installation process, but does not offer a way to install commercial apps for free, for which you normally need to pay for.

There are tons of wonderful applications available written specifically for Linux and personally I can accomplish most of what I want or need to do with these Linux native applications. But I can well imagine that there are use cases or just a specific preference to want to use a Windows application. You can of course install a version of the Windows operating system in a virtual environment within your Linux installation via, for example, the free Oracle VM Virtual Box and then install and run the Windows application there, but many applications run fine under the Wine solution integrated in Zorin OS, which is mostly the simpler option. So if the need is there, try the above and see to what extent your specific Windows application can be used via Wine.

If you appreciate what I do on this website…,

How to set up your graphics card in Zorin OS 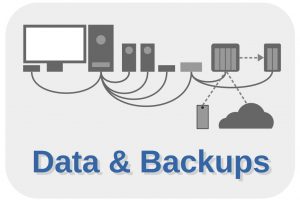